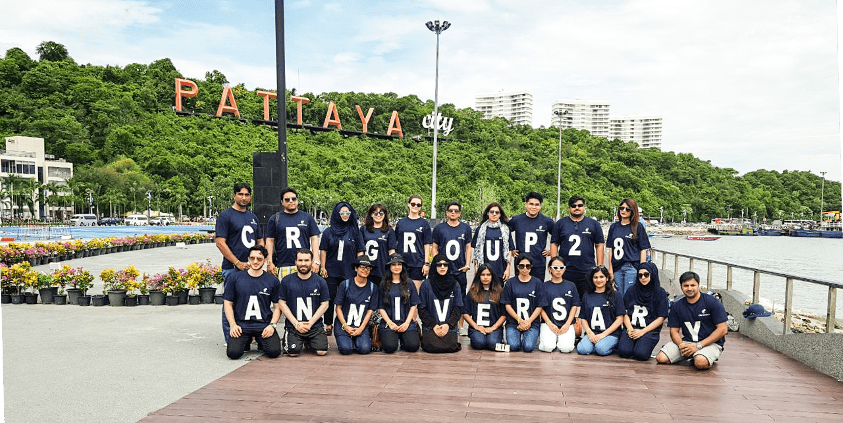 CRI® Celebrates 28 Years with a Trip to Thailand

2018 has been a big year for CRI® Group, a global leader in Risk, Compliance and Anti-Corruption Management Systems. First, the firm was granted accreditation by the Emirates International Accreditation Centre (EIAC) as an ISO 37001:2016 Anti-Bribery Management System Certification and Conformity Assessment Body (the first accreditation of its kind awarded to a certification body specialising in global anti-bribery and anti-corruption, risk and compliance standards).

Then, CRI® Group proudly announced that it will host its Anti-Bribery Summit 2018 in Kuala Lumpur, Malaysia – following the success of last year’s inaugural event. The two-day summit offers expert training and the sharing of best practices for fighting bribery and corruption.

Following both of these major announcements, more than 20 CRI® Group employees gathered in Bangkok, Thailand to celebrate the company’s 28th anniversary. CRI® Group organised the trip to help employees connect, share in their achievements together, and enjoy all of the sights, sounds and great cuisine of Thailand in the ultimate team building trip.

CRI® Group was originally founded as the “Metropolitan Detective Agency” by Mr. Muhammad Anwar Naveed, the father of CRI® Group CEO Mr. Zafar I. Anjum. It was a one-man private investigation firm that dealt with insurance claim investigations. In 1990, Mr. Zafar Anjum (a former member of the Pakistan Rangers who had earned a Graduate Diploma from Pakistan Detective Training Institute PDTI) formally launched the business as a full flagged district level detection agency with a full range of services including insurance claim fraud investigations, background checks and due diligence.

While working one insurance fraud case in particular, Mr. Zafar Anjum realised that a certain aspect of the affair struck him: Whereas most types of crime are dealt with by the justice system, fraud is peculiar in that it often mandates investigation by an external agency or organisation which specialises in fraud detection.

“I noticed that such organisations were sorely lacking in Pakistan at the time – and that there was a distinct lack of counter fraud education in the general population, which aided those committing fraud greatly”, Mr. Zafar Anjum said. “Furthermore, even where individuals were aware that they were being defrauded, they lacked the knowledge of how to effectively resolve disputes between themselves and the defrauder. Therefore we started a very first corporate investigation company in Pakistan specialising in Fraud Risk Investigations, Risk Consulting and Compliance solutions”.

Mr. Zafar Anjum raised the firm to a new level in 2001 when he incorporated and registered it in Pakistan as a Private Limited Company with a new name: Corporate Research and Investigations (Private) Limited, offering full-scale investigative research services. Corporate Research and Investigations Limited was incorporated in 2006 in the UK, and Corporate Research and Investigations LLC DIFC was incorporated in 2008 in UAE. Today, the company stands as a leader in employee background screening services, investigative due diligence, third-party risk management services and Anti-bribery Management Systems. CRI® Group safeguards some of the world’s leading businesses by establishing the legal compliance, financial viability and integrity levels of outside partners, suppliers and customers seeking for affiliation.

Currently based in London, UK, CRI® Group is a global firm with experts and resources located in key regional marketplaces across the Asia Pacific, South Asia, the Middle East, North Africa, Europe and North America. The company’s success and growth continues, as it recently expanded into North and South America and Asia while opening three new branches: Toronto (Canada), São Paulo (Brazil) and Shanghai (China).

While reflecting on CRI® Group’s history, Mr. Zafar Anjum said the recent EIAC accreditation is a major milestone and a result of the commitment and hard work of the entire team. CR®I Group administers ISO 37001:2016 Anti-Bribery Management System Certification through its Anti-Bribery and Anti-Corruption ABAC® Center of Excellence, which it launched in October of 2016.

“It is a special honour to be the very first accredited conformity assessment body in Middle East, Asia and the UK”, Mr. Zafar Anjum said. “This accreditation is a testament to the expertise of our global network of audit specialists and the result of 28 years providing high-level risk management and compliance solutions to organisations worldwide seeking to combat the detrimental effects of bribery and corruption”.

CRI® Group’s ABAC®  Center of Excellence was created to educate, equip and support the world’s leading business organisations with the latest in best-practice due diligence processes and procedures, providing world-class anti-bribery and anti-corruption solutions to organisations seeking to validate or expand their existing compliance frameworks to maintain a competitive edge in the world marketplace.

“We are striving to ensure compliance and ethics being best practices for companies and their third-party relationships, and we believe this is a very best defence against all corporate malpractices”, said Mr. Zafar Anjum.

A Time to Celebrate

The idea for the meeting in Thailand grew from CRI® Group’s achievements, and also the company’s focus on human connection as the key to career success, recognising the positive attitudes and encouraging efforts of all employees that help lead the company to new heights year after year. The trip to Thailand was an enthusiastic “thank you” for their hard work.

The group was made up of 22 CRI® Group employees from various worldwide locations. They were joined by Mrs. Kanwal Zafar, wife of Mr. Zafar Anjum, as they gathered in Bangkok for four days. They also visited Pattaya, took a trip to the Coral Island, took a cruise in the river and enjoyed Thai food, culture and each other’s company. As one of the most important aspects of the trip, they engaged in several team building activities to strengthen rapport and communication.

Dubai-based CRI® Group employee Ayesha said: “We had an amazing time in Thailand to celebrate our achievement of accreditation by EIAC. I wish for CRI® Group to have more success ahead so that lots of such trips come our way!”

Austeja, who is based in the UK, said: “The best thing is that we met each other. We do communicate internally a lot, but never met each other in person. I believe from now on, our communication will be even more effective and the bonds we built will help the company to reach even higher goals”.

Muhammad, from Pakistan office, mentioned: “It was my first trip abroad and it was a very peaceful and enjoying journey to Thailand with CRI® Family. Very effectively and thoroughly planned by HR and Admin department. Must say a very well-done job.  Thanks to Sir Zafar and Mam Kanwal for such a memorable trip.”

HR manager Ayesha concludes: “On this auspicious event, I would like to congratulate Mr. Zafar Anjum who have set the foundations of this company 28 years back and worked hard day in and day out to reach heights of success. And this 28th anniversary is very special for all of us as we have achieved EIAC accreditation in this year and we are an Accredited CB for the scope of ISO 37001:2016 ABMS. It is rightly said, and I quote: “Celebrate what you have accomplished, but raise the bar a little higher, each time you succeed”.”

Congratulations to Mr. Zafar Anjum and all CRI® Group employees for an anniversary to remember! 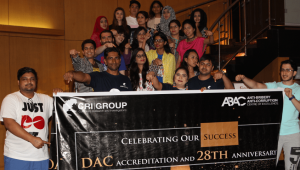